Buses!! – probably one of the most common curse words for those with sight loss. Personally, I would much rather use a train, even if it takes longer, even though I have to pay for a train ticket, for me I actively refuse to use a bus if I can in any way avoid it. However, this shouldn’t be the case. A bus should be just as easy to use and access as any other form of public transport.

This is why on Thursday 19th October 2019 I attended the RNIB’s “Swap With Me” event.
There’s a lot that can be improved when it comes to public transport which is why i feel it is important, if it is appropriate and realistic, that people attend these types of events when they are offered. Not only can you air your own thoughts and experiences but you can also then have that 2 way conversation with the other party, in this case bus drivers, which you can’t normally do. It is important becasue, without the feedback of the service user they don’t know what’s wrong, so how can they improve? Okay, I’m not saying they WILL change, but at least there’s more chance of it happening. How do we know unless we try?

So what happened at “Swap With Me”? So, when we arrived at Blackwood Bus Depot we were met by our hosts Stagecoach. From here we were shown in to the training room where we all got to have a short time to tell the bus drivers in attendance our experiences – good, bad and how we think things could be improved. This was a good chance to really get into the issues surrounding bus travel. There were a lot of similarities in experiences, such as buses not stopping for users, drivers forgetting to tell users of their stops, buses without announcements which raised anxiety and stress levels etc. I think the consensus ended up being that having mandatory announcements on all buses would make a massive impact. The user would not need to rely on the driver and could therefore feel more confident and independant when using the bus. Which at the end of the day, that’s all anyone wants. One of the biggest agreements between the users and the drivers was probably the topic of respect. I know this will probably sound ‘cliche’, but it’s true – users need to respect the driver, and the driver needs to repect the user. Think about it, if you’ve had bad experiences with the last 5 drivers and the next one you lose your temper with and aren’t quite as courteous as you usually are, all the driver may think is that you’re being rude. This can then impact on them and their perception of the user. It’s a bit of a vicious cycle really. Not only that, but the driver needs to understand that we can’t see where they’re pointing to, we can’t see the number on the bus, or possibly the timetable, so some understanding and patience alone would go a long way to improving some peoples bus travel.
Again, this is why these events are a necessity. It’s an opportunity for us all to express ourselves, and really start talking to each other, the company and other users. Helping to improve the way that the service is run.

After all the serious talk, that’s when we got down to the fun practical. The VI people that attended the event sat on the bus while the bus drivers were either blindfolded or were given Sim Specs to wear. Using these limiting methods, the drivers were then taken on to the bus and were sight guided to a seat. Every driver noted how difficult the experience was – finding a seat, figuring out depth perception (i.e trying to tell how far away the seat was), trying to figure out which seats were available or not etc.

Here’s one of the moments where I think one particular driver learnt the most! So this one driver was being guided to a seat, one thing that the person guiding them had not noticed was that there was a metal pole approaching at head height – until it was too late! BANG. Yes, this was a total and utter accident, but personally I felt that it was a true and realistic incident! I know I’ve hit my head on buses before! So I turned to the driver and honestly said, “ouch! Hope you’re ok. That didn’t look good. BUT! I’m afraid to say, I don’t really have much sympathy. Because, that DOES happen. You had probably one of the most realistic experiences”.

Finally, once it was almost concluded, I got to do the one thing I’d been looking forward to – sitting in the drivers seat! I’m not saying this is the only reason I went, but it was certainly the highlight. Since my family are VI too I’ve never really seen the drivers area of a vehicle. It was fascinating, and I’ve gotta say, I never realised a bus driver had so many buttons and levers, it was unreal. I definitely learnt something too – the driver has the responsibility of everyones health and safety while travelling, has to take note of the road, pedestrians, other cars and vehicles, and a dozen or so controls for all the features of the bus itself. That’s a lot to have in mind.

Finally, I do hope that those from Stagecoach took lessons away from this event. I think one of the main things that I’d like to pass along from Stagecoach is – “yes please do tell us about the good and positive things we do. But it’s a lot more important to tell us about the things we’re not doing so good at. This is important for our improvement. If you don’t say, then we don’t know”. These are important words to remember. So next time you’re having an issue with your local bus company, bus or driver – tell them. Be constructive and respecful about it, but inform them of your issues. Whatever the problem is that you’re facing, phone them up, email them or go to these types of awareness events. Tell them the issues and hopefully things will start to improve or change. If not, don’t sit back and give up, keep telling them. If you keep on stating the issues, you never know! They might improve their service just to get rid of you haha! 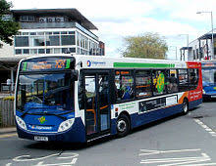 This is an image of a Stage Coach bus